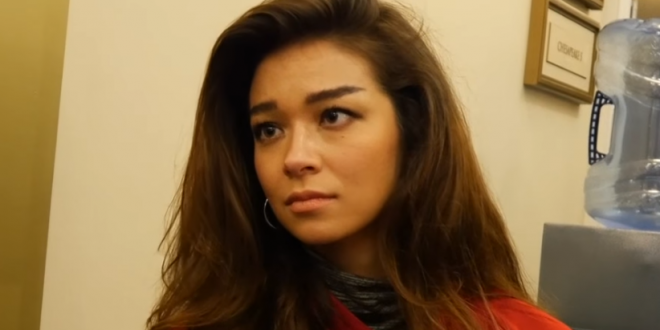 She is Donald Trump’s favorite White House reporter – invited back by his press secretary when other journalists had her network removed for refusing to socially distance at his coronavirus briefings.

But a DailyMail.com investigation has uncovered serious questions over One America News (OAN) White House Correspondent Chanel Rion’s background, finances, and how she obtained security clearance to be in the White House.

In fact, DailyMail.com can disclose that Rion changed her last name before applying for White House security clearance last year and that until becoming a correspondent for the conservative network last May, she had no obvious source of income, despite a social media profile filled with designer dresses and vacations in upscale hotels.

There’s much more at link. Of special interest is Rion’s father, who has been sued for allegedly defrauding investors out of millions under his own many different aliases. Whoa.

OANN and Rion have a history of reporting favorably about Trump. Rion herself has pushed conspiracy theories that advance his political interests, such as the unfounded allegation that officials in Ukraine secretly manipulated the 2016 election to help Hillary Clinton. Trump, in turn, has tweeted praise of OANN’s reporting dozens of times.

In October, she claimed that former FBI lawyer Lisa Page and former FBI Deputy Director Andrew McCabe had had an affair — a story later retracted by OANN. She later traveled to Ukraine with Rudolph W. Giuliani to produce a documentary series for OANN about Giuliani’s claims in support of Trump’s actions in withholding military aid to the country.

I’m not “Breaking White House Distancing Guidelines,” I’m the only journalist in the room personally invited by ⁦@WhiteHouse⁩.

Incidentally, @WHCA has no legal jurisdiction over the briefing room.

Chanel Rion, the OANN personality who just asked Trump whether criticizing his COVID-19 response is equivalent to siding with the Chinese Communist Party, is a Seth Rich conspiracy theorist who has called on “armed Americans” to fight the left. https://t.co/vwAisvsVhT

Chanel Rion also built an OANN special around a conspiracy theorist who claims Dr. Fauci personally funded the creation of the coronavirus. And now the president’s praising her in the White House briefing! https://t.co/13bopwSQr9

This is more farcical than anything, but Chanel Rion also claims to be the author of a hit series of YA mystery books. But there’s no evidence those books actually exist! https://t.co/cGbu02Hei2