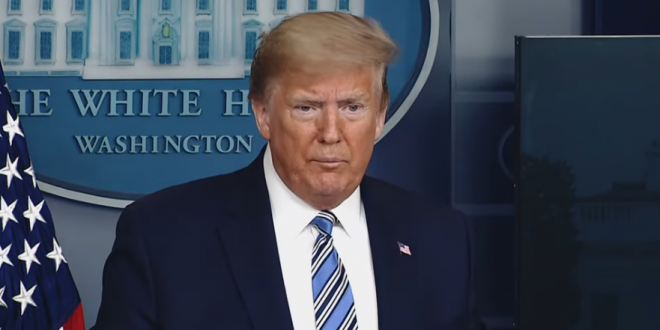 Trump’s Latest Lie: “I Haven’t Left The WH In Months”

A reporter reminded President Donald Trump that he held campaign rallies in February and March. He responded by suggesting he didn’t recall these rallies — and saying that hasn’t left the White House in “months” except for a coronavirus-related trip to Virginia in late March. Trump’s laughably obvious false claim about his travels was one of several false claims at his White House coronavirus briefing on Monday. Trump held five campaign rallies in February and one on March 2. He left the White House on several occasions in March.

After the campaign’s last rally on March 2, Trump continued to travel, albeit not frequently. On March 6, he visited the Centers for Disease Control and Prevention headquarters in Atlanta, stopping on the way in Tennessee after a tornado killed 25 people. He then spent the weekend at his Mar-a-Lago club and residence in Florida. He visited the Federal Emergency Management Agency headquarters in Washington on March 19. As he said, he also left the White House on March 28 to send off the Comfort.

Read the full article for more fact-checks on the many lies told at yesterday’s briefing/campaign rally.

Trump today: “I haven’t left the White House in months.”

Just last month he took a three day golf vacation at his private club in Florida and threw a lavash party. pic.twitter.com/TJ8FwE61mY

“I haven’t left the White House in months!” – Trump