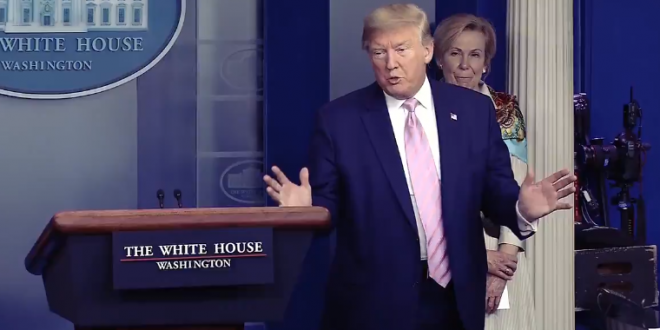 Trump Vows To Stop WHO Funding (Unless He Doesn’t)

President Trump lashed out on Tuesday at the World Health Organization, creating a new enemy to attack and threatening to withhold funding from the world’s premier health institution even as a deadly virus ravages nations around the globe.

In effect, Mr. Trump was attempting to blame the W.H.O. for the very missteps and failures that have been leveled at him and his administration. Public health experts have said Mr. Trump’s public denials of concern about the virus slowed the American response, which included slow testing and a failure to stockpile protective gear.

Trump: Sure, you could say I compared this to the flu, but the worst pandemic ever, in 1918, was a flu. So “the flu is nothing to sneeze at.”

This is revisionist history. In likening this virus to the flu, he was very much not saying this could be a 1918 pandemic.

Trump is flat out lying to the American people and right now our network and all networks should be cutting in to FactCheck him. If we’re going to carry these ridiculous briefings, we need to give it context and we need to fact check a President who has trouble with the truth

The U.S. is right to freeze WHO funding. Instead of acting in the best interest of our global health, the WHO has served as a propaganda arm for the Chinese government. WHO’s actions are unacceptable. https://t.co/hL225BZPsQ

Trump slams WHO for “calling it wrong.” But it was Trump who was calling it wrong for weeks on the Coronavirus. The WHO called the outbreak a pandemic on March 11. Trump cited the WHO in an address to nation on same day. https://t.co/cGrt4NDBC1

In the span of 8 minutes, Trump said:

“We’re putting a hold on our WHO funding.”

“I never said we’re putting a hold on our WHO funding.”

These briefings are pointless. He lies with every breath, the reporters don’t call out his lies, & his followers don’t care that he lies.

Trump denies saying he will withhold funding to the WHO after he just said it. Listen to a reporter call him out after he claims he didn’t say it. pic.twitter.com/phlIKvYnpZ

Previous Trump: “Mail-In Voting Is Horrible, It’s Corrupt,” But I Totally Vote By Mail “Because I’m Allowed To” [VIDEO]
Next CHATTER AWAY: Overnight Open Thread