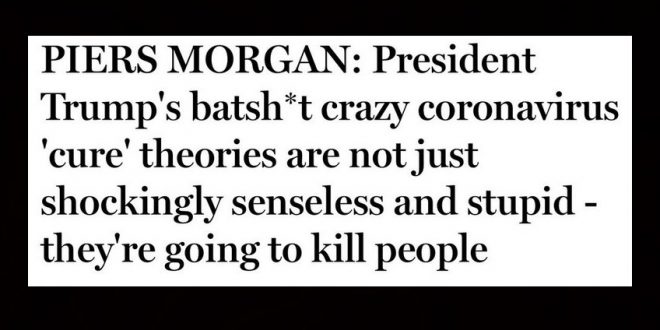 Morgan and Trump have had a friendly relationship for over a decade dating back to 2008 when the president declared him the winner of Celebrity Apprentice. For two straight years in a row Morgan received an exclusive sit-down interview with Trump during both of his visits to the United Kingdom.

However, the friendly relationship between the two have gone sour after Morgan wrote a column for the Daily Mail blasting Trump’s “batshit crazy” coronavirus cure. Morgan opened up the opinion piece saying, “SHUT THE F**K UP, PRESIDENT TRUMP!”

UPDATE: President ⁦@realDonaldTrump⁩ has unfollowed me on Twitter, hours after I wrote this ⁦@DailyMail⁩ column: pic.twitter.com/uRncON3Up7

President Trump’s defence for floating batsh*t crazy claims that injecting bleach can kill #coronavirus is that he was being ‘sarcastic’.
FFS @realDonaldTrump – this is not a joke. 50,000 Americans are dead & many more will die. Stop this nonsense & get serious.