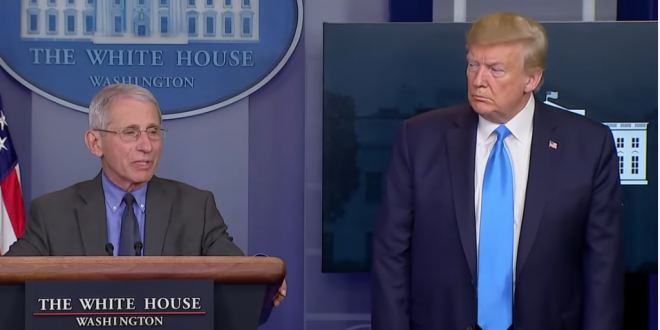 President Trump publicly signaled his frustration on Sunday with Dr. Anthony S. Fauci, the federal government’s top infectious disease expert, after the doctor said more lives could have been saved from the coronavirus if the country had been shut down earlier.

Mr. Trump reposted a Twitter message that said “Time to #FireFauci” as he rejected criticism of his slow initial response to the pandemic that has now killed more than 22,000 people in the United States. The president privately has been irritated at times with Dr. Fauci, but the Twitter post was the most explicit he has been in letting that show publicly.

The tweet came amid a flurry of messages blasted out by the president on Sunday defending his handling of the coronavirus, which has come under sharp criticism, and pointing the finger instead at China, the World Health Organization, President Barack Obama, the nation’s governors, Congress, Democrats generally and the news media.

“What do you think of Fauci?” the president repeatedly worked into his phone conversations over the past few days, the three sources said, as he pulsed his broader network of informal advisers, industry allies, and current staff on their opinions on the news of the day.

At one point this weekend, Trump remarked that he’s made Fauci a “star” and that barely anybody would have known who the doctor was were it not for the president putting him front and center in the administration’s coronavirus response, televised press briefings, and media strategy.

By Sunday afternoon, prominent Trump allies and surrogates were circulating links and documents showing how Fauci had been inconsistent or made faulty predictions about the virus in recent months, encouraging each other to share them or use them as talking points.

The woman Trump retweeted, a failed House candidate who challenged Nancy Pelosi in the 2018 primary, last appeared on JMG in late March when she helped lead the “empty hospitals” hoax campaign launched by Shitbag Todd Starnes.

Fauci is now saying that had Trump listened to the medical experts earlier he could’ve saved more lives.

Fauci was telling people on February 29th that there was nothing to worry about and it posed no threat to the US public at large.

Sorry Fake News, it’s all on tape. I banned China long before people spoke up. Thank you @OANN https://t.co/d40JQkUZg5

fact check: you banned commercial flights. but not -all- commercial flights. and you did NOTHING to stop Chinese container ships and their crews from entering our ports. but keep lying to your dimwit worshipers, in their eyes it’s always someone else’s fault. neat trick, grifter

When it comes to the #COVID19 vaccine, the only thing I have to say is "My body, my choice."