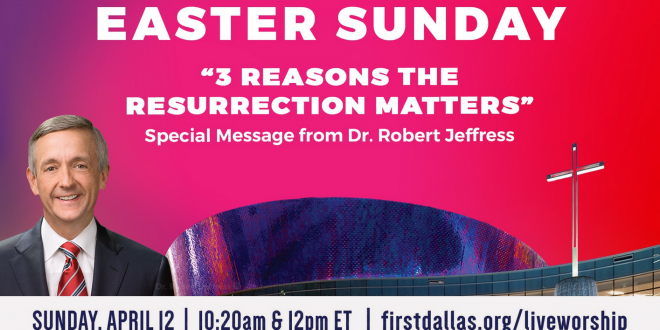 President Donald Trump said Friday that he’ll attend Easter services on Sunday, virtually, along with congregants of Dallas’ First Baptist Church, where his friend and adviser is senior pastor. “I’m going to be watching Pastor Robert Jeffress,” Trump said at his daily coronavirus task force briefing. “He’s been a great guy, and I’m going to be watching on a laptop. Now a laptop is not the same as being in his church or being in another church.”

But he said, like other Americans, he’s avoided crowds for three weeks, and it’s not yet time to return to normal activities. As for Jeffress, he was one of Trump’s earliest and most vocal backers among evangelical Christian leaders in the 2016 campaign. He has been steadfast in defend the president against complaints that his personal morals haven’t always measured up to the standards of religious conservatives.

Jeffress has said that all Jews and Mormons go to hell, that Obama was the precursor to the antichrist, that LGBTs need rescuing from Satan’s deception, that God designed the borders of the United States, that there will be civil war if Trump is removed from office, and that God gave Trump the moral authority to have foreign leaders assassinated. And that’s just a wee taste of his crackpot batshittery.

Robert Jeffress says “you can’t be saved by being a Jew,“ and “Mormonism is a heresy from the pit of hell.” He’s said the same about Islam. Such a religious bigot should not be giving the prayer that opens the United States Embassy in Jerusalem.

Wishing all a safe and blessed Easter Sunday. I will be tuning into Pastor @robertjeffress at https://t.co/roBC6bOARn Church in Dallas, Texas tomorrow morning at 10:20 AM Eastern. https://t.co/wCa7u6qSnl