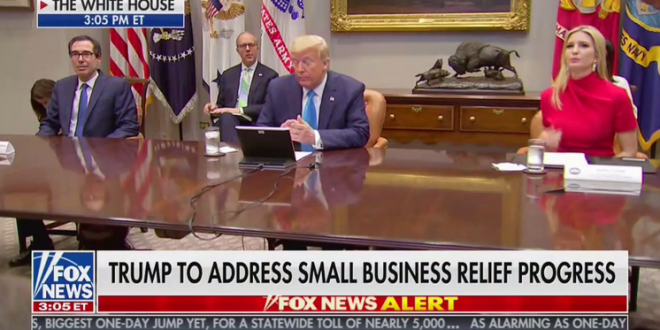 Trump: Ivanka Created 10% Of All US Jobs [VIDEO]

On Tuesday, President Trump hosted a call with business leaders to discuss efforts to provide financial relief to small businesses. During that call, he made an astounding claim: that his daughter Ivanka personally created 15 million jobs.

To put this claim in perspective, as of January — before the coronavirus pandemic caused the US economy to start hemorrhaging jobs — about 152 million people in the United States were employed, according to the Bureau of Labor Statistics.

So Trump is claiming that his daughter created about 10 percent of all the jobs in the United States. Ivanka has apparently been working overtime in recent months: During an event last November, Trump claimed that his daughter has “gotten jobs for” 14 million people.

Trump just told the completely egregious lie that Ivanka Trump “created over 15 million jobs.” That would be more than twice the total number of jobs created in the country before coronavirus wrecked the economy. pic.twitter.com/zniSteAbv6