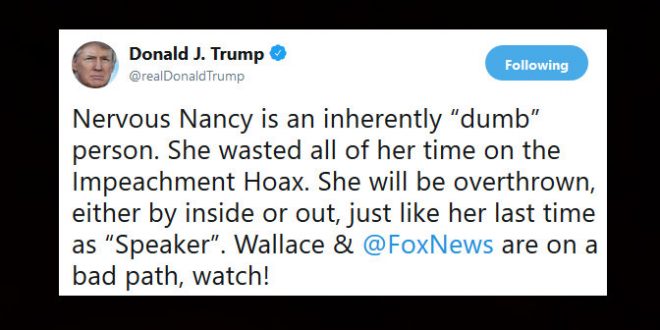 Trump, who often clashes with Pelosi, angrily tweeted about the speaker Sunday afternoon after she appeared on Fox News Sunday to speak with host Chris Wallace.

The president, making sure to express his displeasure with Wallace, as well, called Pelosi an “inherently ‘dumb’ person,” and suggested she will soon be “overthrown.”

arlier in the day, before Trump’s latest insult, Pelosi told George Stephanopoulos on ABC’s This Week, that she doesn’t pay much attention to Trump’s tweets, anyway.

Nervous Nancy is an inherently “dumb” person. She wasted all of her time on the Impeachment Hoax. She will be overthrown, either by inside or out, just like her last time as “Speaker”. Wallace & @FoxNews are on a bad path, watch! https://t.co/nkEj5YeRjb

Calling Speaker Nancy Pelosi an inherently “dumb” person is like something that comes out of the mouth of a 3rd grader, not the President of the United States. It would be shocking to see except Trump has desensitized us with his daily buffoonery and disgracefulness.

Here’s why he’s losing his mind– she called him out on his bullshit:

“To proceed which policies which were not science-based, which were not evidence-based, and to blame others … LEADERS TAKE RESPONSIBILITY. So I said he’s a weak leader, he doesn’t take responsibility.” pic.twitter.com/4GLeKG6HWN