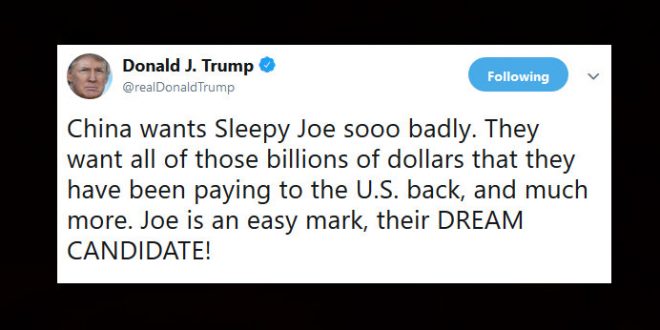 The group’s “Beijing Biden” ads herald Trump’s travel restrictions from China while declaring that “for 40 years, Joe Biden has been wrong about China,” spliced with ominous music, footage of Biden with President Xi Jinping and ending with insignia of the red and yellow Chinese flag on the Democrat’s face.

As economists have explained countless times, tariffs are paid by the American companies that import the goods and NOT by China. Trump continues to rely on the stupidity of his cultists.

China wants Sleepy Joe sooo badly. They want all of those billions of dollars that they have been paying to the U.S. back, and much more. Joe is an easy mark, their DREAM CANDIDATE! https://t.co/vmvCr4SkQq

But Biden is the easy mark. Sure. pic.twitter.com/BWJSPvRGmM