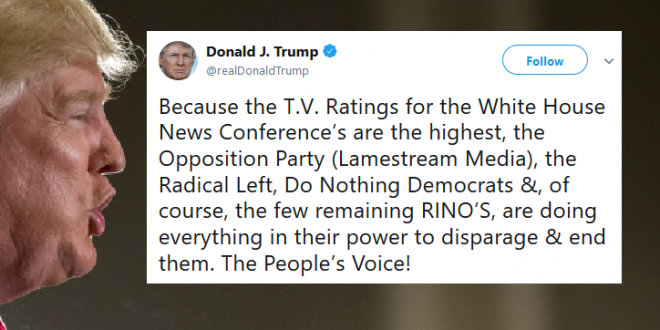 Trump is likely reacting to this Fox News story:

CNN’s most prominent anchors and reporters have ratcheted up their attacks against President Trump during the coronavirus outbreak as the liberal network continues to blur the lines between straight news and opinion journalism.

Media company Grabien founder and editor Tom Elliott said it’s “notable” that CNN, who for months chastised the White House for halting the daily press briefing, is “now patting itself on the back” for not airing significant portions of the coronavirus task force briefings, including the president’s prepared remarks.

“There’s no doubt the coronavirus is the biggest news story of the decade, and the White House is on the leading edge of America’s response. That CNN believes it needs to decide on their viewers’ behalf whether these briefings are newsworthy suggests they don’t have much confidence in their viewers’ intelligence,” Elliott told Fox News.

Because the T.V. Ratings for the White House News Conference’s are the highest, the Opposition Party (Lamestream Media), the Radical Left, Do Nothing Democrats &, of course, the few remaining RINO’S, are doing everything in their power to disparage & end them. The People’s Voice!

Someone’s mad CNN didn’t air his fake campaign rally yesterday. Raise your hand if you agree @CNN and @MSNBC should not air them. #StopAiringTrump

Trump crowed about his ratings as the United States of America ran out of basic medical supplies during the worst pandemic in modern history.

There’s something dementedly narcissistic for a president to obsess over his television ratings when thousands of Americans are dying in one of the worst crises our nation has seen ind decades. https://t.co/LuFN6zIj9Q

congrats on the success of your death show