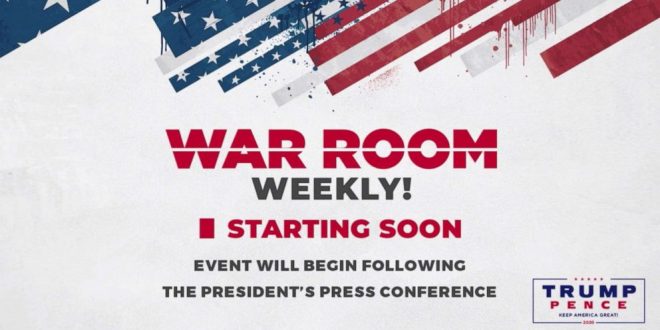 It’s a virtual hand-off between the president and his campaign that’s become routine each night. Trump’s re-election team has found a way to capitalize on the attention generated online from the briefings by strategically airing nighty digital events that effectively serve as a post-game show for the president’s loyal base.

And each night, Trump’s team followed up his remarks with a string of slickly produced digital shows across social media aimed at reinforcing messaging around his coronavirus response, blasting presumptive Democratic nominee Joe Biden and firing up supporters while campaign rallies remain on hold.

The president’s campaign’s daily shows also rake in big numbers thanks to the team’s large digital operation—averaging about 1 million views each between streams on platforms like Twitter, YouTube, Twitch, and MIXER, and Facebook, according to the campaign.

Previous Trump On Dictator Kim Jong-Un: “I Wish Him Well”
Next CHATTER AWAY: Overnight Open Thread