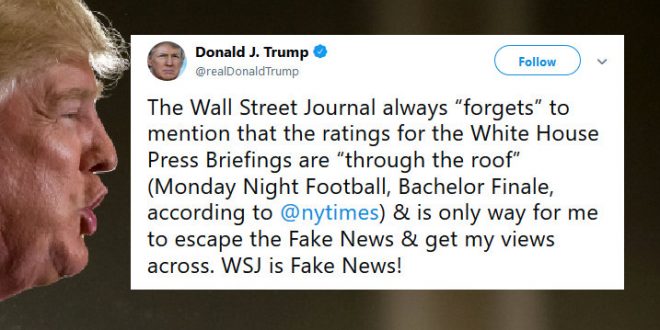 President Donald Trump fired back at The Wall Street Journal editorial board after they declared that his daily coronavirus press conferences have become “boring” and not productive, calling the outlet “Fake News” and touting the high rating numbers for the televised pressers.

The Wall Street Journal always “forgets” to mention that the ratings for the White House Press Briefings are “through the roof” (Monday Night Football, Bachelor Finale, according to @nytimes) & is only way for me to escape the Fake News & get my views across. WSJ is Fake News!

It’s so demoralizing that we have a “President” who is so proud that his ratings are through the roof when 799 New Yorkers literally died in one day. He literally thinks this is a reality TV show called Trump Pandemic competing with Monday Night Football and the Bachelor Finale.

My God. You’re just a bottomless pit of whiny neediness.

Previous Defiant Pastor: If My Parishioners Die, It’s For God
Next WH: Journalists Who Attend Briefings Must Be Tested