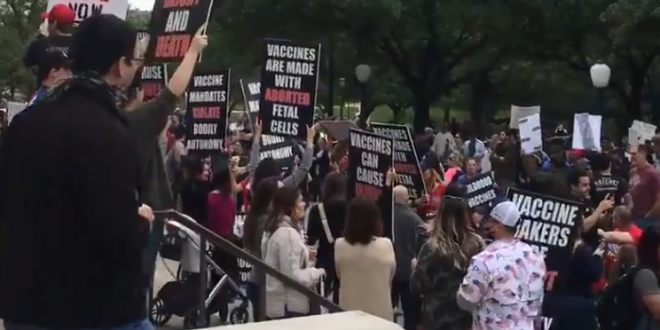 Protesters gathered Saturday afternoon at the state Capitol in Austin to demand that Gov. Greg Abbott reopen Texas for business. The “You Can’t Close America” rally was held to protest state and federal mandates to close certain businesses and enforce social distancing to slow the spread of COVID-19.

The rally was promoted by Owen Shroyer of InfoWars, the Austin-based conspiracy-touting website. Shroyer told his online audiences last week that coronavirus was part of a scheme by the Chinese to undermine President Donald Trump’s reelection, and the overwhelmed hospitals in New York are “propaganda.”

The Texas protest, which also included anti-vaccine activists, was organized by Owen Shroyer, a host of Infowars, which is a part of a company owned by conspiracy theorist and radio host Alex Jones. Shroyer also broadcast a small protest earlier this week outside the governor’s mansion in Texas.

Jones joined protesters on the Capitol steps on Saturday and was quickly surrounded by his fans. He is being sued in Austin for using his show to promote the false conspiracy theory that the 2012 Sandy Hook massacre was a hoax.

Hundreds in attendance from all over Texas, rallying to reopen the economy. pic.twitter.com/f9eE6TxE6T

Scene from a protest by Trump supporters in Texas to re-open the state, despite the announcement of a phased re-opening. That Trump is fomenting civil unrest in the midst of a pandemic is completely insane. At this rate, we won’t survive until November. pic.twitter.com/wzrh61Rj4s

CBS Austin has gathered pictures of protesters at the Capitol today, they’re rallying against the stay at home orders. pic.twitter.com/bNz3Bppq6x

The scene in Austin today during a protest against the stay at home order. Photos by Callaghan O’Hare pic.twitter.com/ZaLZz3Bcqb