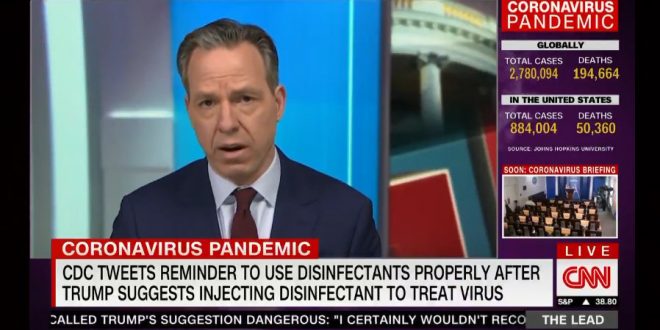 CNN anchor Jake Tapped called out White House Press Secretary Kayleigh McEnany as well as “the president’s factotums in the right wing media” for claiming the media took POTUS out of context, before noting how Trump “made their empty defenses of him even less rooted in fact when he claimed he had been sarcastic and he was posing the questions to journalists.”

“Which is not remotely what happened. Simply put, it’s a bald-faced lie,” Tapper said. “The president wasn’t even talking, posing the bizarre question about disinfectants to journalists, he was talking to an official of the Department of Homeland Security who had been talking about how sunlight and disinfectants helped to kill the coronavirus when it was in the air and on nonporous surfaces, not when it was in the human body.”

“Simply put, it’s a bald face lie,” says @JakeTapper on President Trump’s false claim he did not suggest looking into internal disinfectant as a coronavirus treatment.

“It’s ridiculous. Obviously he was not being sarcastic,” added Tapper. https://t.co/T3bSmtVZkt pic.twitter.com/KcJyg9cqKk