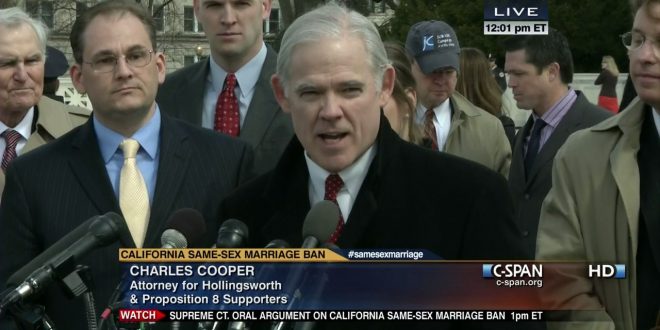 The attorneys who defended Proposition 8, the ill-fated 2008 ballot initiative that barred same-sex marriage in California, are pressing a federal court to block the public release of the video recording of the landmark 2010 trial that concluded the ban was unconstitutional.

Charles Cooper, founding member of the Washington litigation boutique Cooper & Kirk, argued in a motion filed Wednesday in the U.S. District Court for the Northern District of California that then-U.S. District Chief Judge Vaughn Walker assured attorneys during the trial that he was only allowing a video of the proceedings so he could review them in chambers while he crafted a decision.

In 2018, U.S. District Judge William Orrick of the Northern District of California ordered the recordings to remain sealed until Aug. 12, a decade after Walker declared the same-sex marriage initiative unconstitutional, unless the defenders of the ban could offer “compelling reasons” for the video to stay private.

Read the full article. Cooper last appeared in 2017 when he was hired by then-Attorney General Jeff Sessions to represent him during testimony in the Mueller investigation.

Cooper defended Proposition 8 before the US Supreme Court on behalf of California’s viciously anti-gay Protect Marriage, but made a u-turn in 2014, declaring that his own daughter’s marriage to a woman had changed his mind on the issue.

Only one reason for this: they know their is no legal basis for their bigotry. California’s Same-Sex Marriage Foes Press to Keep Trial Video Under Wraps | The Recorder https://t.co/s1BVicW5Yy