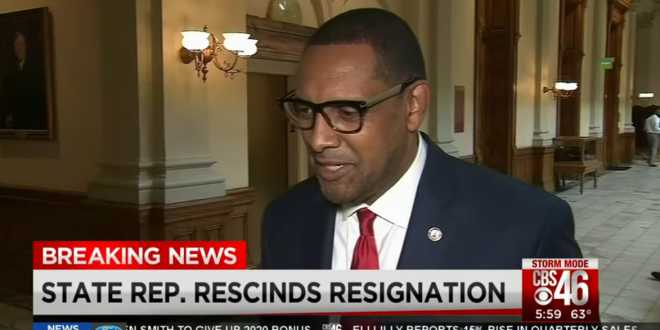 A Democratic Georgia lawmaker who recently endorsed President Donald Trump announced on Thursday that he is no longer planning to resign and will instead serve the remainder of his term. A day after Rep. Vernon Jones said he would resign effective immediately, Jones posted a Twitter video stating he changed his mind because he received “overwhelming” support from his constituents.

“Because of what you did for me, I’m going to remain on the battlefield,” Jones said. “I’m going to complete my term. I’m going to continue to put my country before my party. And I’m going to do everything I can to get Donald J. Trump elected.” Jones has been the subject of a complaint alleging that he doesn’t live in his district, which includes portions of metro Atlanta’s DeKalb and Rockdale counties. He has called the accusation baseless.

Joe Biden once said the Republicans wanted to put “Black people in chains”.

Isn’t that what he and the party tried to do when I decided to endorse @realDonaldTrump? Put me back in chains?

Yesterday, I announced my intentions to resign from my office. But shortly thereafter, the outpour of support I received was too great for me to ignore.

I will not allow the Democrats to bully me into submission. I will not let them win.

I will NOT resign. #MAGA pic.twitter.com/gR2MsU5Rb3