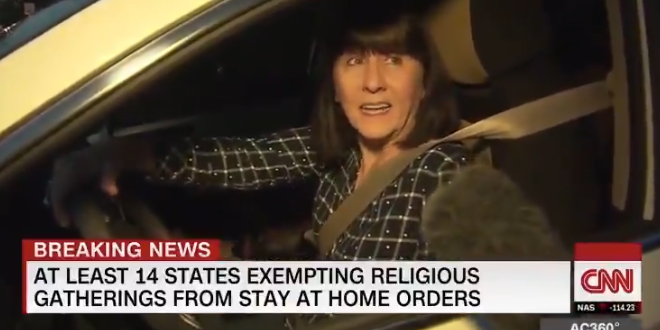 OHIO: Woman Isn’t Worried About Attending Church Because She’s “Covered In The Blood Of Jesus” [VIDEO]

While plenty of churches are hosting online services, CNN interviewed a handful of people in Ohio who explained why they are still attending Solid Rock Church in the city of Warren. The answers are as ignorant and self-absorbed as you can expect.

One woman answered, “I wouldn’t be anywhere else.” When asked if she was concerned about getting infected or infecting others, she responded, “I’m covered in Jesus’ blood!”

She wasn’t the only person to offer “Jesus’ blood” as an answer, as if it’s a cure for every disease. The pastor at the unnamed church was also interviewed, claiming that no one in his church was sick, because if they were, “he would know.”

Breaking: A double blind RCT from Bovine University in Collaboration with the Hollywood Upstairs Skool of Medicine has found that covering oneself in the blood of Jesus in public is not protective and may in fact be a risk factor for COVID19.

It should be noted that an earlier study found that covering oneself in the blood of Jesus and giving praise in the sanctity & security of ones own home was associated with a marked decreased risk of contracting the disease.