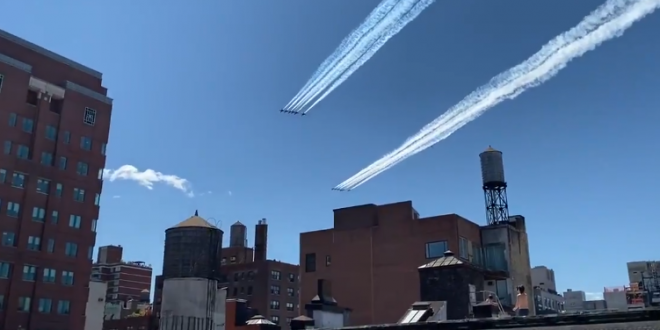 The U.S. Navy Blue Angels and the U.S. Air Force’s Thunderbirds performed a flyover of New York City today. The flight began at noon near the George Washington Bridge. The fighter jets flew in formation over Newark, New Jersey before heading back over Manhattan, Brooklyn, and Queens.

After that, the Blue Angels and Thunderbirds crossed the Long Island Sound and make their way in the skies over Stamford, before heading back into New York for a pass over The Bronx and back down along the East River.

The Thunderbirds and the Blue Angels flying behind the freedom tower in New York City. #blueangels #Thunderbirds pic.twitter.com/cemJoto0ao

In every dictatorship, there is a fancy military parade or flyover to project an image of strength when it’s really to hide profound weakness in the country’s leadership. Doctors want personal protective equipment and stay at home orders instead of a useless military air show.

This is spectacular and historic tribute to all those on the frontline of the war against #COVID19!

It’s ironic because the Blue Angels flying over the country to distract from the chaos of the pandemic are part of the military-industrial complex that distracted the country from its developing disparity and political decay that laid the groundwork for the pandemic.

View of @BlueAngels flyover from Manhattan’s Upper West Side. pic.twitter.com/Limk6kOrTV

The #Blueangels and #Thunderbirds flying over #NYC as a salute to all the #COVID19 #FrontLineHeroes pic.twitter.com/sSKFvsHXhG

People are actually complaining on the social media about The Blue Angels flying over NYC in honor of the medical workers on the front line. My god. When does it stop? The wrong people are dying. 😞

Previous Kansas Man Drank Cleaner After Trump’s Comments
Next AFA Defends Trump On Disinfectants: He’s Not Crazy, He Knows So Many More Things Than Those Reporters