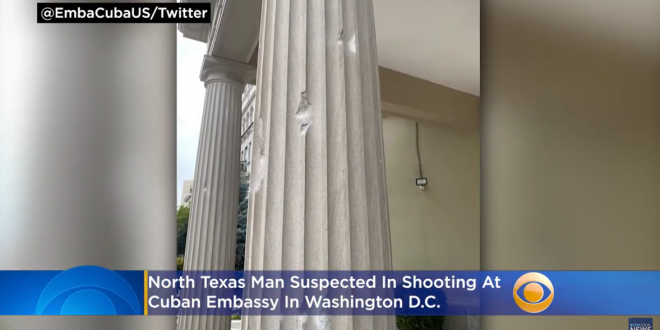 A man armed with an assault rifle was arrested after opening fire outside the Cuban Embassy in Washington early Thursday, his bullets tearing holes into the walls and pillars near the front entrance in what authorities suspect was a hate crime.

The gunfire broke out around 2 a.m. outside the embassy in northwest Washington. Metropolitan Police Department officers were called to the scene after neighbors reported hearing gunshots, authorities said. No injuries were reported.

Officers found the man, Alexander Alazo, 42, of Aubrey, Texas, armed with an assault rifle, and they and took him into custody without incident, police said.

Photos from the scene posted to social media showed investigators searching through an SUV, and a bullet hole in a window over the front door. Damage could be seen to a flagpole and a column flanking a statue of Cuban independence hero José Martí.

Aggression with fire arm against the Embassy of #Cuba in the U.S.

Cuba is waiting for the investigation by U.S. authorities on the identity and motives of the individual who carried out this aggression and the circumstances surrounding the event.

There was no personal injury to the Mission staff, which is safe and protected, but there was material damage caused to the building resulting from the impact of the bullets. pic.twitter.com/z4uvwbBdaK

On Cuban TV moments ago, Foreign Minister Bruno Rodriguez Parrilla said that Cuban diplomats were inside embassy at the time of shooting & that US officials have so far not shared information on the incident. pic.twitter.com/opr00M0P0j