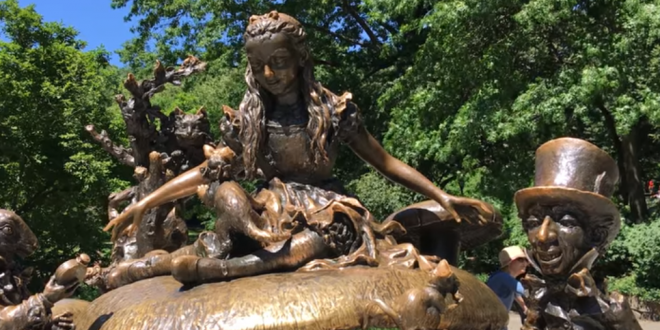 A man who allegedly threatened to blow up the “Alice in Wonderland” statue in Central Park was arrested after police found knives, rifle ammunition and what appeared to be three empty pipe bombs in his Manhattan apartment, prosecutors say.

Kevin Fallon, 30, sent a group text to several people he knew around 8 p.m. on April 9 saying he planned to blow up the iconic statue, which sits above the boat pond near East 74th Street, according to a complaint filed with the Manhattan District Attorney’s Office.

Early the next morning, he sent someone else he knew a LinkedIn message with a photo of what appeared to be a pipe bomb, saying it was “a replica alarm clock pipe bomb… that really works,” the complaint says.

On Saturday, he allegedly sent loved ones — including an ex-girlfriend and his father — photos of a pipe bomb and rifle ammunition along with a chilling threat to “look both ways before you cross the street. This is going to hurt. None of you are safe. I am lethal,” according to court documents.

Another missive included a photo of an apparent pipe bomb with a wristwatch attached to it, and said “the alarm clock bomb is for real. When I give it to him it will be filled with powder and ready to detonate,” according to court records, which identify “him” only as one of the people he was texting with.

He was arraigned Monday and his charges include making a terroristic threat and criminal possession of a weapon, according to court documents. Fallon is being held on Rikers Island with a bail of $50,000. His next court date will be on July 13, public records show.

I am not the Kevin Fallon who was just arrested for trying to blow up Central Park’s Alice in Wonderland statue. https://t.co/RNmwu9kcQS

That’s exactly what that Kevin Fallon would say.