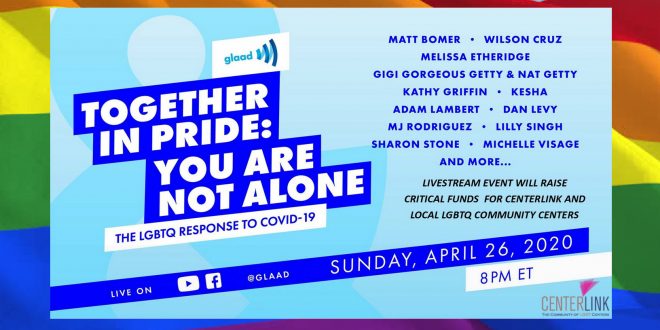 LIVE VIDEO: GLAAD Presents Star-Studded “Together In Pride” With Babs, Buttigiegs, Rosie, And Many Others

Billy Eichner and Lilly Singh will co-host the event, which will include special performances from Alex Newell, the cast of Broadway’s “Jagged Little Pill”, as well as previously announced performances from Kesha and Melissa Etheridge. Mj Rodriguez and George Salazar, who previously co-starred in ‘Little Shop of Horrors’ at Pasadena Playhouse, will also perform.

“Together in Pride: You are Not Alone” will highlight the LGBTQ response to COVID-19 and amplify messages of acceptance and affirmation to the LGBTQ community and people living with HIV during this unprecedented time.

The livestream event will feature performances, interviews, video messages, and interviews with front-line LGBTQ doctors and leaders of local LGBTQ community centers. Actor and producer Erich Bergen is creating the event with GLAAD.

The “Together in Pride: You are Not Alone” livestream will also raise critical funds for CenterLink, a coalition of more than 250 LGBTQ community centers from 45 states, Puerto Rico, the District of Columbia, as well as Canada, China, Mexico, and Australia.

GLAAD’s “Together in Pride: You Are Not Alone” is adding a major star to the lineup. EW can exclusively reveal that Barbra Streisand has joined the upcoming livestream event to deliver a special message for GLAAD’s fundraiser, which is being co-hosted by Billy Eichner and Lilly Singh.

Plus, Pose’s Mj Rodriguez and Broadway star George Salazar will perform the song “Suddenly Seymour” following their acclaimed roles in the Pasadena Playhouse production of Little Shop of Horrors.