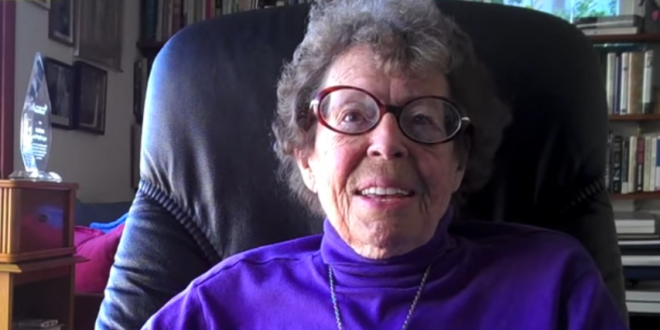 One of the founding members of the Daughters of Bilitis and one half of the first same-sex couple to be legally married in San Francisco in 2004, Phyllis Lyon, has passed away. She was 95, and reportedly died of natural causes early Thursday.

Lyon and her wife Del Martin were famously the first couple to be granted a marriage license by then Mayor Gavin Newsom on Valentine’s Day 2004, and her life was characterized by a commitment to activism and equal rights for all.

“I’m very sad to learn of the death this morning of Phyllis Lyon,” writes legendary LGBTQ activist Cleve Jones. “I met Phyllis and Del in 1972 and it changed my life. Two of the most remarkable people I’ve ever known.”

In San Francisco, the women embarked on a lifelong career of activism. In 1955, along with three other lesbian couples, they co-founded the Daughters of Bilitis. Known as DOB, it was the first political and social organization for lesbians in the United States.

Shortly after founding DOB, the couple began publishing The Ladder, the first monthly lesbian publication focused on politics, fiction, poetry and connecting lesbians across the country.

The founding of DOB and the publication of The Ladder, continuously from 1956-1972, were acts of immense political courage at a time of unchecked harassment and violence directed at “homosexuals,” largely at the hands of law enforcement and political officials.

It is with a heavy heart that I share the news that Phyllis Lyon has left this life. She died peacefully this morning at 95 of natural causes. She and Del are dancing again. I will miss her so much. #phyllislyon

RIP lesbian pioneer Phyllis Lyon (L, below), who with her partner, Del Martin, were the first same-sex couple married by then-SF Mayor Gavin Newsom in 2004. That occasion was captured in the front page SF Chronicle photo below, one of the most beautiful news photos ever shot. pic.twitter.com/UTVt6u55gO

Today, we lost a giant in our community. Phyllis Lyon left an indelible mark on our fight for full, lived LGBTQ+ equality and we will forever be grateful.

Rest in power, Phyllis. We already miss both you and Del. pic.twitter.com/6nrCzaSBra

Fierce femme, Phyllis Lyon, lives on in our actions not just our hearts! pic.twitter.com/wgvyT1GuJ9

I’m so sad at the passing of Phyllis Lyon, a trailblazer, a fearless activist and a good friend. Phyllis was a real power, not only for San Francisco but for the country, and I’ll truly miss her energy, determination and kindness. pic.twitter.com/lhuCQSHAR8

Iconic lesbian activist Phyllis Lyon died peacefully at home in San Francisco of natural causes. She was 95. Lyon and her partner of 58 years Del Martin were the first same-sex couple to marry in California in 2008. https://t.co/GgtyTfy9UO

Phyllis Lyon was an iconic figure in #LGBTQ and specifically lesbian history. She passed away today, leaving behind a remarkable legacy of activism for equality. May she rest in power.https://t.co/tlKBATG0Ip

Lesbian rights pioneer Phyllis Lyon died this morning at age 95. KALW’s @OutintheBay interviewed her and her longtime partner Del Martin in 2006. They were the first same-sex couple to wed in 2004 when then-Mayor Gavin Newsom challenged state law. https://t.co/M8lkyIOGAb

Phyllis Lyon’s immeasurable contributions to LGBT equality trace the history of modern San Francisco, from the 1955 founding of the Daughters of Bilitis, to her marriage to Del Martin in 2004. It’s truly the end of an era. https://t.co/KboxTX2sAx