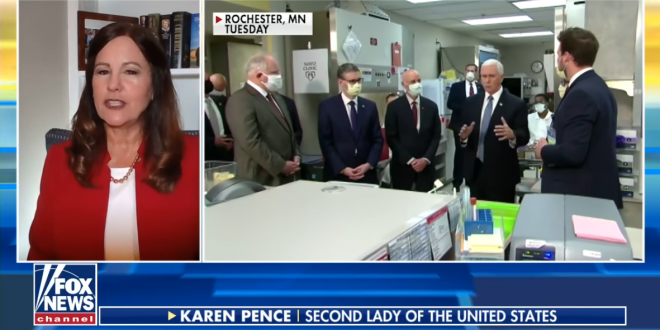 Karen Pence, the wife of Vice President Mike Pence, is defending his decision to not wear a mask during a recent visit to the Mayo Clinic, saying he was unaware of the hospital’s coronavirus policy until after he left. In an appearance on Fox News Channel on Thursday morning, Mrs. Pence said the vice president was following the advice of medical experts and hadn’t intended to offend anyone. Pence, like other senior White House staff, is tested for the virus at least once a week.

“As our medical experts have told us, wearing a mask prevents you from spreading the disease. And knowing that he doesn’t have COVID-19, he didn’t wear one,” Mrs. Pence said, adding that it “was actually after he left Mayo Clinic that he found out that they had a policy of asking everyone to wear a mask.” The Mayo Clinic had tweeted — then deleted — that it had informed the vice president of its “masking policy prior to his arrival.”