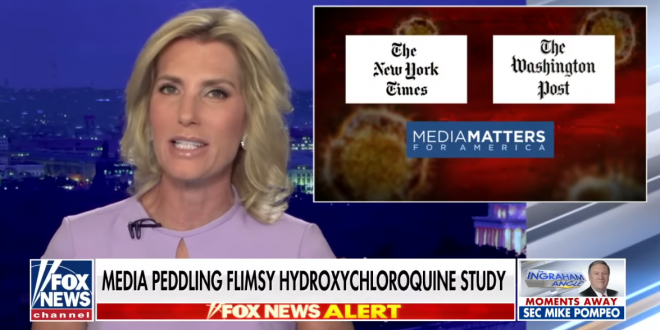 “Well, the jackals at Media Matters thought they had their prey trapped, and now, journalism is such a joke that even The Washington Post and tonight the New York Times reflexively joined the pig pile. It’s just pathetic.

“Now, I’m not a doctor, I don’t play one on TV, but renowned French virologist Dr. Didier Raoult released his own study on hydroxychloroquine and azithromycin just a few weeks ago.

About the VA study:

An anti-malarial drug President Trump has aggressively promoted to treat covid-19 had no benefit and was linked to higher rates of death for Veterans Affairs patients hospitalized with the novel coronavirus, according to a study, raising further questions about the safety and efficacy of a treatment that has seen widespread use in the pandemic.

Rates of death in the groups treated with the drugs were worse than those who did not receive the drugs, the study found. Rates of patients on ventilators were roughly equal, with no benefit demonstrated by the drugs.

Previous Judge: Right Wing Site’s Anti-Union Tweet Was Illegal
Next US May Cut Back Intel Sharing With Anti-Gay Countries