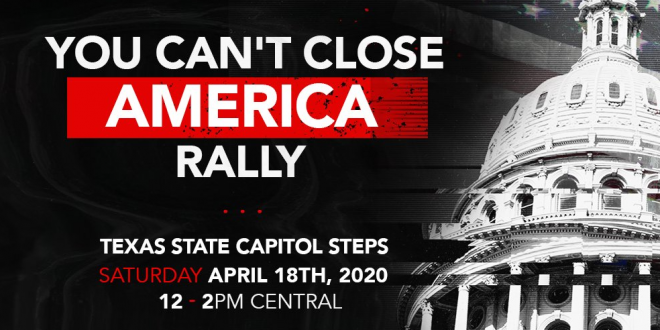 We’re going to see a lot of more of these:

Infowars host Owen Shroyer — the organizer of an April 18 in-person rally at the state Capitol in Austin, Texas, to protest coronavirus restrictions — is using Twitter and the company’s streaming platform Periscope to promote the event.

While Twitter banned accounts for Infowars and its head Alex Jones in 2018, the ban does not apply to other Infowars personalities.

Shroyer announced that he would be hosting a rally he is terming “You Can’t Close America” despite a stay-at-home order in Texas that “requires all Texans to stay at home except to provide essential services or do essential things like going to the grocery store.”

Shroyer has said that his in-person gathering is inspired by similar protests that have occurred elsewhere and has claimed that reports of large numbers of COVID-19 deaths are actually “Chinese Communist propaganda.”

As you can see below, small protests are already taking place at the Texas capitol and Shroyer was there to film and egg on the idiots. Oh, and he throws in some “empty hospitals” crapola in the “jabroni” clip below.

Join the movement in Austin, Texas on Saturday! #ReopenAmericaNow #ReopenTexas

Freedom Suspended In America? I Don’t Think So Jabroni!

Well I know mainstream news won’t be asking when I see 5G ads running during their breaks.