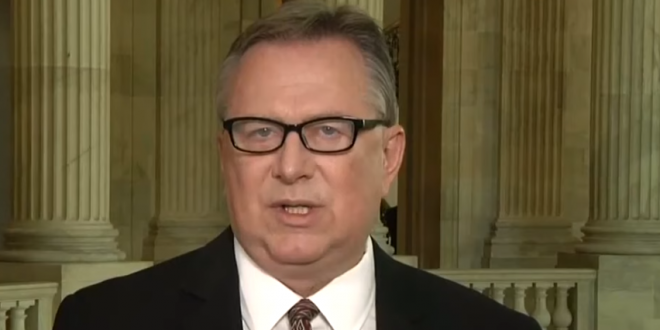 Pattie Stockman, wife of former Rep. Steve Stockman (R-Texas), asked President Trump to pardon him amid the coronavirus pandemic so his 10-year sentence for fraud and other white-collar crimes “does not become a death penalty.”

Stockman, a conservative firebrand, was convicted in April 2018 of 23 felonies for allegedly misusing $1.25 million in campaign funds for personal expenses. The 63-year-old is currently serving his sentence in a federal prison in Beaumont, Texas.

“My pleas are reasonable. Keeping an aging, physically vulnerable, non-violent, non-sex crime convicted inmate in prison during a pandemic is cruel. My husband is not a danger to society. At a minimum, I want Steve to shelter at home so that he’s not sent to me in a body bag in a few weeks,” Patti Stockman said.

Stockman, who relentlessly flogged the Benghazi issue, first appeared on JMG in 2013 when he distributed a World Net Daily book calling for Obama’s impeachment to all 535 members of Congress. That same year Ted Nugent was Stockman’s guest at Obama’s state of the union address.