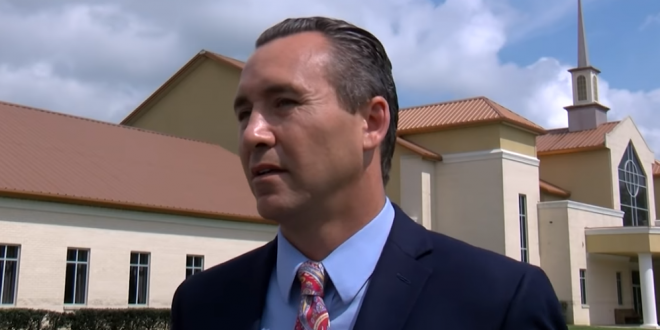 Hundreds of worshippers attended services at a Louisiana church on Sunday, flouting a ban on large gatherings, angering neighbors and seemingly turning a deaf ear to their governor, who once again warned that hospitals could soon be overwhelmed with new cases of the coronavirus.

An estimated 500 people of all ages filed inside the mustard-yellow and beige Life Tabernacle church in Central, a city of nearly 29,000 outside Baton Rouge.

Assistant ministers and worshippers who stood outside the front doors and in the parking lot of Life Tabernacle told news reporters to leave, saying cameras would not be allowed on the property and they had been told not to talk to the news media. They went inside without further comment.

The minister was fired up for his flock Sunday at Life Tabernacle Church, and though he’s previously been arrested for doing this — he opened church doors again to his congregation, but also posted his service live on social media.

Spell claims he had 1,345 in attendance — which he says is higher than his usual turnout. We say claims, because the congregation was rarely shown. We don’t know if it was intentional, but the camera never showed more than a couple of rows of pews.

Not really shocking from the man who told us his parishioners would be happy to die from COVID-19 if it meant they could attend church in-person.

While many churches are finding an alternative way to celebrate Easter, Pastor Tony Spell of Life Tabernacle Church is continuing his in person services. In text messages, Pastor Spell claims more than one thousand people have attended several of his services in the past few weeks. Now, East Baton Rouge Officials are saying documentation may prove otherwise.

Mayor-President Sharon Weston Broome said she doubts that thousands have gathered in Spell’s church. “I think the numbers have been exaggerated, but the truth of the matter is the congregants that attend church there should now know the severity of what we are dealing with,” Broome said. Broome called Spell’s actions irresponsible.