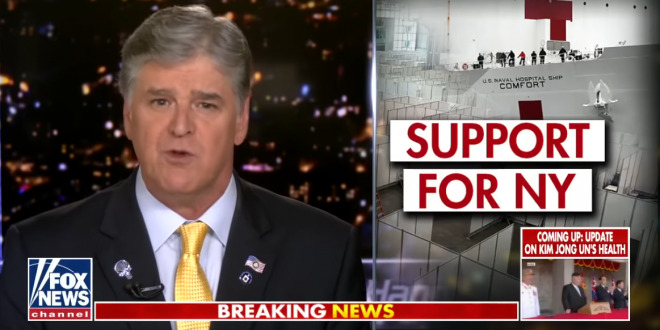 “Instead New York City, thanks to President Trump – you can thank him Mr. Mayor – is seeing, thankfully, a precipitous decline in hospitalizations, intubations, a death rate, not fast enough but is also declining.

“Comrade de Blasio, he should be thanking the president because he built and manned the hospitals for you Mr. Mayor. He sent you the ventilators you sold, he sent you the medical equipment you never had knowing that the threats were real for New York.

“Now you should be held accountable for your complete ineptitude, incompetence, and frankly, you’re kind of ungrateful too. Because the American taxpayers, we’re paying for all of that. That means people outside of New York, you can thank them too.” – Sean Hannity, last night.