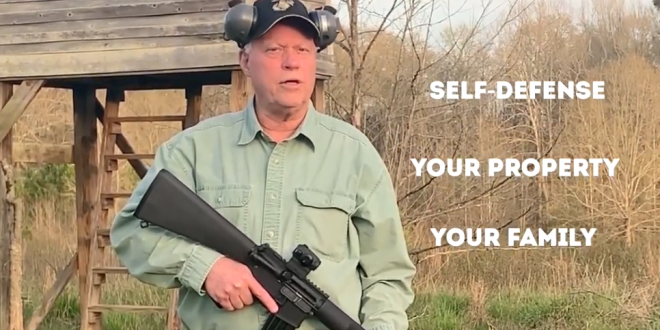 Former U.S. Congressman Paul Broun is turning to pandemic fear-mongering and a gun giveaway in an effort to return to the U.S. House of Representatives.

The GOP politician from Georgia’s latest ad leans in hard on the 2nd Amendment, and includes what sounds like a racist dog whistle. In the spot, Broun says warns you might have to defend against “looting hordes from Atlanta” during these “uncertain times.”

Broun, who served as the Rep. for GA’s 10th congressional district from 2007 to 2015, also touts AR-15s as the ultimate “liberty machine” for fighting off a tyrannical government and the ever-looming threat of socialism.

Broun is running for his old seat which will be vacated due to Rep. Doug Collins’ bid for the US Senate.

Hehmant Mehta reminds us that while in Congress, Broun declared that evolution is a “lie from the pit of hell” and that he “anointed” the doorway to the US House before Obama passed through to deliver his first address as president.

Broun appeared on JMG many times during his US House tenure, including for calling on militias to launch a literal revolution against “fascist dictator Obama” and for his failed House resolution calling for 2010 to be declared “National Year Of The Bible.”

Previous Roseanne: COVID Is Designed To “Get Rid Of Boomers”
Next Loeffler Pledges To Liquidate Personal Stock Holdings