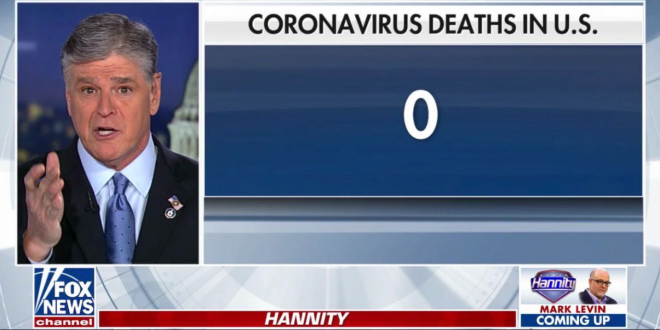 Fox Hosts Deny Downplaying Virus (Which They Did)

After spending weeks downplaying the deadly virus that now has nearly the entire U.S. under some form of lockdown, several Fox News stars are now attempting to gaslight viewers by claiming they sounded the alarms over the coronavirus all along while it was actually the media and Democrats who dismissed it.

The network’s most-viewed primetime host Sean Hannity has recently devoted much airtime to insisting he has “always taken the coronavirus seriously,” despite no less than a month ago suggesting the pandemic might be a “deep state” plot to hurt the economy.

Or, at another point, claiming concerns over the novel virus was a “new hoax” designed to “bludgeon” Trump. But despite Hannity’s perceived confidence in his coronavirus coverage, video and audio recordings do exist.

Read the full article for SO much more.

“I’m not afraid of the coronavirus and no one else should be that afraid either.”

Democrats and the media repeatedly downplayed the coronavirus threat pic.twitter.com/4F4Phnw8WD

If we ever open museums again, can we put this Feb 27 Hannity screenshot in one pic.twitter.com/dy2ws2kfOE