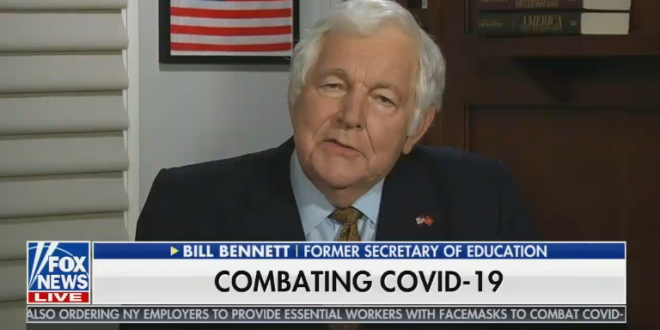 Fox Contributor: This Is Like The Flu, Not A Pandemic

“The estimates now from the University of Washington, which is the model everybody’s been going on — even though its been wrong most of the time, by a lot, overstating it — is now, they say 60,000 people will die, Sixty-one thousand is what we lost to the flu in 2017 and 2018 — the flu.

“Now, we all regret the loss of 61,000 people, if that’s what it turns out to be — I’m going to tell you, I think it’s going to be less — and salute all those who are working on the frontlines on this, the hospital workers, the nurses, the doctors, etc., and the generosity of the American people.

“But if you look at those numbers, and see the comparable, we’re going to have fewer fatalities from this than from the flu. For this, we scared the hell out of the American people, we lost 17 million jobs, we put a major dent in the economy, we closed down the schools — you heard Dr. Oz say we probably didn’t have to do that — shut down the churches, and so on.

“You know, this was not, and is not a pandemic. But we do have panic and pandemonium as a result of the hype of this. And it’s really unfortunate. Look at the facts.” – Fox News contributor and lifelong crackpot Bill Bennett, on Fox & Friends this morning.

Bennett last appeared on JMG in November 2019 when he claimed that Trump’s extortion of Ukraine was a “good thing.” Bennett served as Reagan’s secretary of education.