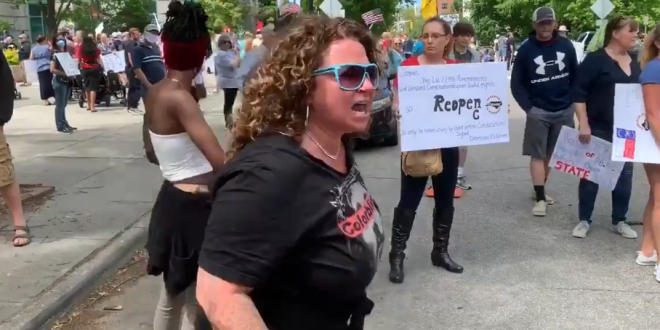 Hundreds of protesters crowded into downtown Raleigh on Tuesday for a third week of rallying aimed at reversing Gov. Roy Cooper’s stay-home order for North Carolina. Four protesters, including ReOpenNC leader Ashley Smith, were arrested when they stepped onto the sidewalk outside the governor’s mansion on Blount Street, violating police instructions. Protesters gathered around the Capitol Police car and banged on the window as Smith was taken away.

“This is how Nazi Germany started,” said her husband, Adam Smith, who was handed bail money by other protesters. Using a bullhorn, he called each officer outside the governor’s mansion a “little piggie.” For the second week, a line of roughly a dozen healthcare workers stood opposite the rally, asking that all of North Carolina continue to follow the stay-home orders. They were immediately heckled by a protester in what appeared to be a knight’s helmet.

In case you were wondering, these are once again the faces of White Privilege. https://t.co/rEeIQu8kBw#raleigh #protests #reopennc #ashleysmith #whiteprivilege #COVID19 #coronavirus

Health care workers in Raleigh standing up to the #ReopenNC protesters and asking @NC_Governor to keep the stay-at-home order in place… Right-wing intimidation tactics don’t work on people who put their lives on the line every day #HealthWorkersDefendNC pic.twitter.com/PrNoxsSYOK

Shoutout to all the NC patriots who oppose tyranny! ReopenNC@realDonaldTrump pic.twitter.com/xihMz0zbjz

People want to get back to work. More Biz signs. #ReopenNC pic.twitter.com/2LDsO0c0p4

For the third week, #reopennc protesters gather in Raleigh. pic.twitter.com/QSKiLM4k6l

More than 100 people gathered in Raleigh Tuesday to ask state officials to #ReopenNC. Here’s what some of their signs said as they rallied. pic.twitter.com/YfOYXBudZw

The media is lying to you. Her hospital is empty. They are 700 surgeries behind. You have to get out and expose yourself to build immunity, she says. pic.twitter.com/Hv5muptBbw

Healthcare workers have arrived and are standing across the street from #ReOpen NC protesters. They’re standing socially distanced with masks on and aren’t responding to hecklers. #ABC11 pic.twitter.com/ByE2Npv5GB

He says state should reopen even if death rate is “50 times” worse. pic.twitter.com/PNBAogoKlL

A pickup truck is park in front of the NC legislative building. #ReopenNC leader Ashley Smith screams “We want to live.” She screams for healthcare workers who came to counter protest to go home, but says “we fight for their right to be here too.” “Freedom,” they scream. pic.twitter.com/eJgBhz6l3W

And folks are rolling into the parking lot on Jones street. #ReopenNC pic.twitter.com/nPvq5AC7rQ