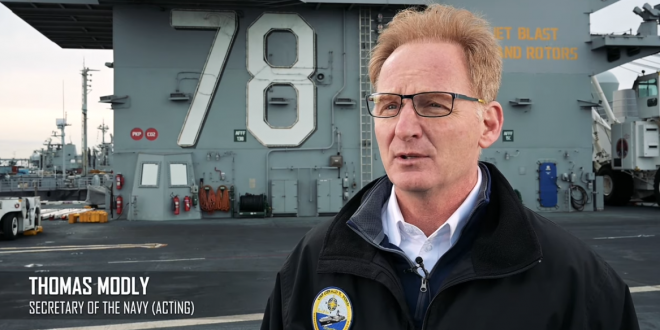 As a coronavirus outbreak swept through a U.S. aircraft carrier crippled off the coast of Guam, the ship’s commander tapped out an e-mail urging senior Navy leaders to evacuate most of the 4,800 sailors onboard.

Capt. Brett Crozier opened his March 30 message to three admirals by saying he would “gladly” follow them “into battle whenever needed.” But he shifted to his concern that the Navy was not doing enough to stop the spread of the virus, and acknowledged being a part of the sluggish response.

The note set off a chain reaction that included acting Navy secretary Thomas Modly’s decision to relieve Crozier from command and Modly’s resignation amid an outcry after audio emerged of him insulting the captain in an address to Theodore Roosevelt sailors. The email shows that Modly mischaracterized the message, accusing Crozier of sending it to 20 or 30 people, as he cited it as justification for removing him from command.

The Acting Secretary of the Navy, Thomas Modly — whose sum total qualification for his job was that he was once a junior helicopter pilot who became an investment banker and Trump campaign donor — visited the USS Theodore Roosevelt this morning and chasitized the crew.

Modly called USS Theodore Roosevelt’s former captain “too stupid or too naive to be a commanding officer of a ship like this.”

I spent most of my adult life in a Navy uniform, I saw the military shit on by civilian leaders over and over, but I’ve seen anything like this.

The Navy Secretary told the crew of a stricken warship their Commanding Officer — and you’d have to understand the DECADES of work, experience, education, and determination it takes to become the Commanding Officer of a US Navy Aircraft Carrier — was stupid and naive.