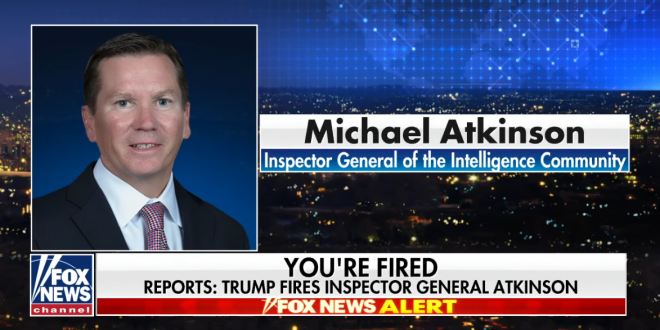 Former Intel IG: Trump Fired Me For Doing My Job

The intelligence community watchdog removed abruptly late Friday by President Donald Trump says he believes Trump ousted him because of his evenhanded handling of a whistleblower complaint that ultimately led to the president’s impeachment.

“It is hard not to think that the President’s loss of confidence in me derives from my having faithfully discharged my legal obligations as an independent and impartial Inspector General,” Michael Atkinson, the intelligence community inspector general said in a statement Sunday, “and from my commitment to continue to do so.”

“As an Inspector General, I was legally obligated to ensure that whistleblowers had an effective and authorized means to disclose urgent matters involving classified information to the congressional intelligence committees, and that when they did blow the whistle in an authorized manner, their identities would be protected as a guard against reprisals,” Atkinson said in his statement.