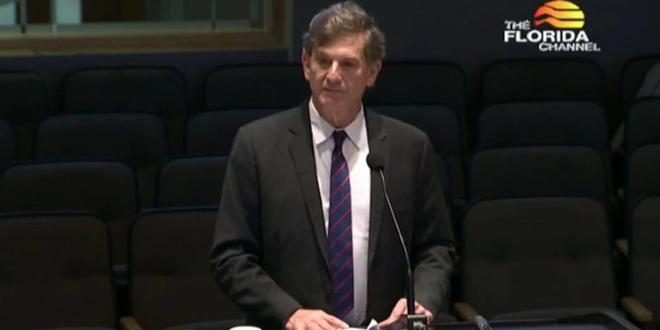 “Until we get a vaccine, which is a while off, this is going to be our new normal and we need to adapt and protect ourselves,” he said. It was the first time in weeks that both Rivkees and Mary Mayhew, secretary for the Agency for Health Care Administration Secretary, were seen at a DeSantis news conference.

Immediately after Rivkees’ acknowledged that a vaccine could be months or more than a year away, DeSantis spokeswoman Helen Ferré shifted attention away from Rivkees by asking reporters if they had questions for Mayhew. Ferré went up to Rivkees and the two quickly left the room. Ferré returned. Rivkees did not.

This is Florida’s Surgeon General being removed from a #COVID19 briefing by @GovRonDeSantis staff right after saying we’ll need to social distance until there is a vaccine. https://t.co/3pBOV7dMP5 pic.twitter.com/czp7dTqfdT

Who is that woman and why is she breathing all over the surgeon general?

This is incredible. Straight out of Chernobyl. pic.twitter.com/l8Whmxw367