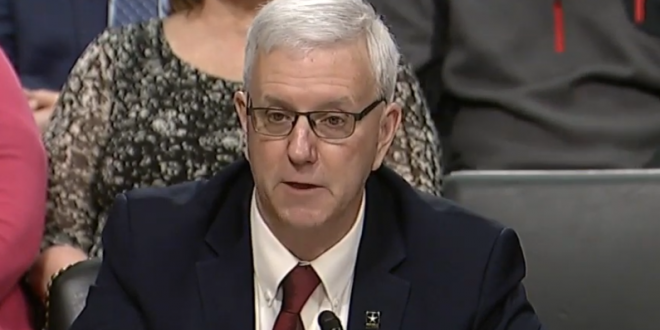 Acting Navy Secretary Thomas Modly resigned on Tuesday, a day after leaked audio revealed he called the ousted commander of the USS Theodore Roosevelt “stupid” in an address to the ship’s crew, according to a US official and a former senior military official.

The Navy and Department of Defense did not respond to a request for comment. Undersecretary of the Army James McPherson [photo] has been tapped to succeed Modly, a US official and a defense official tells CNN. McPherson is a retired rear admiral and was the former judge advocate general of the Navy.

Modly’s Monday morning remarks to the crew prompted sailors to yell back in frustration. President Donald Trump said that he might “get involved” in the matter, and Defense Secretary Mark Esper later ordered Modly to apologize, two US officials told CNN.

Four sources tell @ckubeNBC that Secretary of Defense Mark Esper has accepted the resignation of Acting Navy Sec’y Modly – who created a firestorm when he traveled to Guam and addressed the USS Theodore Roosevelt sailors, criticizing their former Captain and his actions.