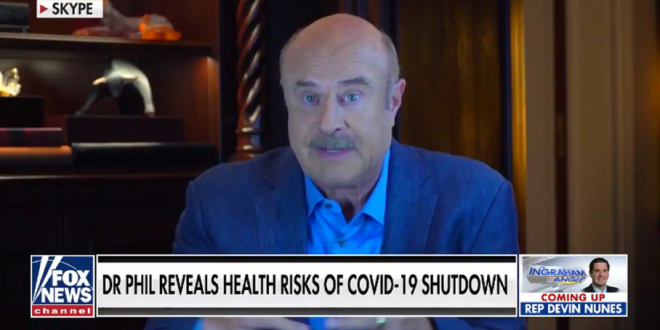 Dr. Phil On Fox News: We Don’t Shut Down For Car Crash Deaths But We Shut Down The Country For This?

TV show host Phil “Dr. Phil” McGraw appeared to downplay the seriousness of the coronavirus pandemic on Thursday’s episode of “The Ingraham Angle” on Fox News, rattling off a series of statistics with at least one glaring error — the number of people who die in swimming pools every year.

“But look, the fact that the matter is we have people dying, 45,000 people a year die from automobile accidents, 480,000 from cigarettes, 360,000 a year from swimming pools, but we don’t shut the country down for that but yet we’re doing it for this? And the fallout is going to last for years because people’s lives are being destroyed.”

Dr. Anthony Fauci, director of the NIH and a member of the White House coronavirus task force, urged a cautious approach on Ingraham’s show Thursday night. His advice was quickly undercut by Dr. Phil in a following segment, when he argued states should reopen their economies even if lives might be lost to the virus to prevent anxiety and depression.

Dr. Phil joins other social distancing naysayers, like Dr. Oz, another TV doctor who told Fox News’s Sean Hannity on Wednesday that an unmitigated coronavirus death toll might be a “trade-off” worth making to reopen schools.

Dr. Drew, known for his 30 years as host of the radio show “Loveline” and as a reality TV regular, also sparked controversy when he compared the coronavirus to the flu. (Unlike Dr. Phil, both Dr. Oz and Dr. Drew are physicians, though neither is an expert in infectious diseases.)

My friend caught an auto accident, didn’t know he had it… brought it to work, and the receptionist caught it. 3 days later, she got ill. They sent everyone home but it was too late. 70 people at his job caught the auto accident from her and 10 ended up in the ICU on ventilators

I really hope @Oprah speaks about the dangerous statements by @DrPhil and @DrOz WE need her voice.

Previous Dr. Oz Sorry For Comments On Reopening: “I Misspoke”
Next Gaetz Exposed In Shady Real Estate Deal With Donor