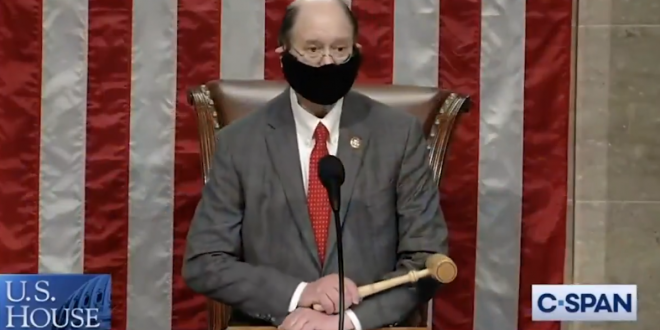 In a sign of the times, Rep. Brad Sherman (D-Calif.) on Tuesday became the first member of the House to preside over the chamber wearing a face covering during the coronavirus crisis.

Sherman wielded the gavel wearing a black mask during a brief “pro forma session,” which the House and the Senate use to satisfy a constitutional provision that neither chamber may adjourn for longer than a certain time without the other’s consent. Most members are back home on recess.

Staff in the chambers appeared not to be taking similar precautions. The Rev. Patrick J. Conroy, the House chaplain, however, delivered a daily prayer wearing gloves. “May love, not fear, go viral,” he said in a prayer in which he also sought divine help in practicing social distancing.

Rep. Brad Sherman (D-Calif.) became the first congressman to preside over the House wearing a face covering during the coronavirus crisis. pic.twitter.com/F3P2lMO6Rm