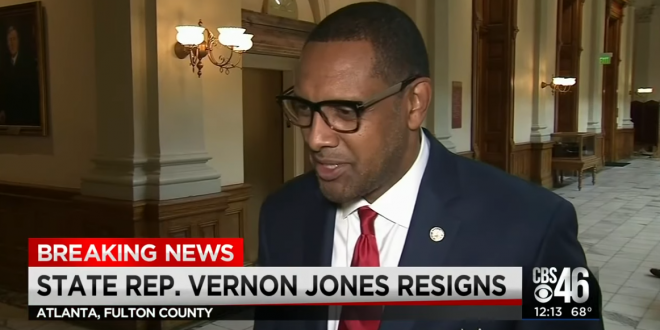 A Democratic state lawmaker from Georgia said Wednesday that he’s stepping down, just over a week after breaking with his party to endorse President Donald Trump. Rep. Vernon Jones announced that he won’t complete his current term representing portions of metro Atlanta’s DeKalb and Rockdale counties in the state House and won’t seek reelection. “I intend not to complete my term effective April 22, 2020,” Jones said in a statement.

Jones has been the subject of a complaint alleging that he doesn’t live in the district. He has called it baseless. Jones is no stranger to controversy. He previously served as DeKalb County’s CEO, weathering allegations of theft in the role, and has often clashed with other Democrats on policy differences around immigration and LGBT issues. Jones spokesman CJ Pearson said he is exploring other ways to continue serving the community as he supports Trump’s reelection.

CJ Pearson, should you be blissfully unaware, is a teenage Trump cultist who became a right wing celebrity at age eight when he began posting YouTube rants.

The Left hates me because they can’t control me.

They can stay mad.

I’ve seen more Democrats attack me for my decision to endorse @realDonaldTrump than ask me why.

They’ve used and abused folks in my community for far too long, taking our votes for granted.

Black Americans are waking up. An uprising is near.