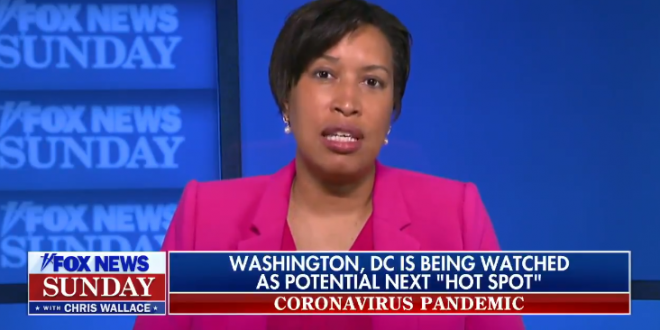 “We expect that that could happen in Washington, D.C. in June,” Bowser told Fox’s Chris Wallace on “Fox News Sunday,” saying “our residents are doing everything that we ask so that we can push down the number of peak cases and push out when that surge would happen in D.C.”

Asked why she projected the surge would occur so late relative to areas like New York, Bowser told Wallace she believed citywide interventions in early March such as the closure of large public venues, bars and dine-in restaurants “pushed back when the peak might occur.”

“That could happen in Washington, D.C. in June.”
DC Mayor Muriel Bowser on when the medical surge in DC will happen. #FNS #FoxNews pic.twitter.com/p87XhkDyn5