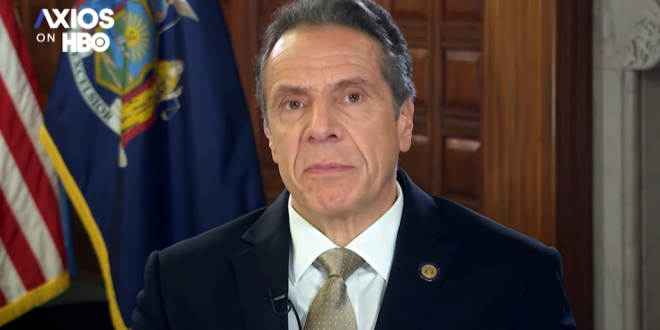 Cuomo Wishes He “Blew The Bugle” On COVID Earlier

In an interview for “Axios on HBO,” New York Gov. Andrew Cuomo told me he wishes he had sounded the alarm sooner about the coronavirus. The coronavirus has now killed more than 22,000 New Yorkers, giving Cuomo’s state the worst death toll in the world — vastly worse than other dense global cities like Tokyo and Seoul. And yet in managing the crisis, Cuomo has been widely praised, and he’s become a fan favorite for Democrats around the country.

I asked Cuomo what he wishes he could change about his response to the virus. “When we heard in December that China had a virus problem, and China said basically, ‘it was under control, don’t worry,’ we should’ve worried. I wish someone stood up and blew the bugle. And if no one was going to blow the bugle, I would feel much better if I was a bugle blower last December and January. … I would feel better sitting here today saying, ‘I blew the bugle about Wuhan province in January.’ I can’t say that.”

Previous US Ranks 45th In Press Freedom Amid Pandemic
Next Hoyer: DC Too Hot With COVID For House To Return