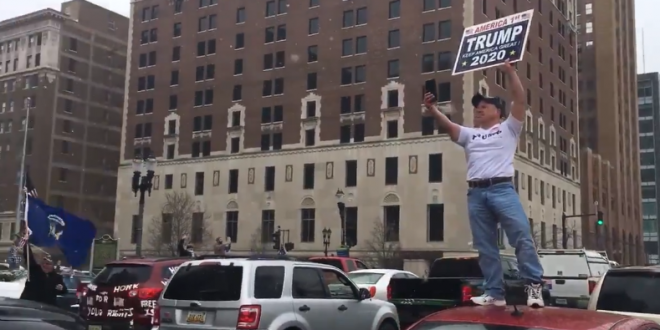 Traffic is moving slowly or not at all around the Michigan Capitol in Lansing while protesters block streets to demonstrate against coronavirus restrictions. Dozens of vehicles snarled traffic around the capitol complex to slow down travel for lawmakers and Gov. Gretchen Whitmer as part of Operation Gridlock.

The protesters are upset about Whitmer’s extended “Stay Home, Stay Safe” order, which placed new restrictions on residents and businesses through the end of April.

The Michigan Conservative Coalition organized Wednesday’s demonstration outside the capitol. The organization, along with Republican lawmakers, are seeking looser restrictions that will put more people back to work.

The protest was supposed to start at noon but people were already packing the roads by 9 a.m. and hundreds of people were standing in front of the Capitol and not social distancing, despite the Facebook event page requesting they stay in their cars.

More drivers were jammed on Capitol Ave, where the one-way three-lane road was bumper to bumper for several miles north of the Capitol.

FOX 2’s Charlie Langton was social distancing among the crowd who told them they were not social distancing because it was their right not to do so but they understand the health crisis. They said they wish Gov. Whitmer had more faith in them not to get infected.

‘GOVERNOR, OPEN OUR ECONOMY ON MAY 1 AND RESPECT OUR RIGHTS AND FREEDOMS.’

You can’t make this shit up.

In Michigan people are clogging the streets with their cars in protest of the stay-at-home order.

If it’s safe to re-open why are they protesting from their cars??

The Michigan Conservative Coalition is holding a vehicle protest to drive home opposition to Gov. Gretchen Whitmer’s executive orders, which have closed schools and businesses and forced residents to stay home under penalty of fine or imprisonment. https://t.co/k3TdXeMOu5

Bumper-to-bumper traffic at Lansing exit for the West Michigan convoy headed to #OperationGridlock. Protest at the Capitol already going on. More pics from Lowell @wzzm13 pic.twitter.com/iKo4lo2dfa

The most epic traffic jam will take place on Wed. outside the Michigan State Capitol to protest @GovWhitmer‘s extreme #COVID19 orders… including that you can’t cross the street. Over 14,000 interested attendees joining the Michigan Conservative Coalition https://t.co/yJ4Ls7Qisy pic.twitter.com/GaKqnMVECr

Thousands of people from all over Michigan are converging on our state Capitol today to protest the governor’s restrictive “Stay Home” order and get their voices, and car horns, heard. #OperationGridlock pic.twitter.com/bgjH4wKCUQ

Lots of people at #OperationGridlock left their vehicles to protest outside Michigan’s Capitol. pic.twitter.com/OvjZ5zwGBa

Half protest, half Trump rally is how I would characterize #OperationGridlock in Michigan. Protesters echo “Half Whit”nickname @realDonaldTrump bestowed on Gov. Whitmer, call on her to reopen the economy. pic.twitter.com/ui8Y4JFVDS