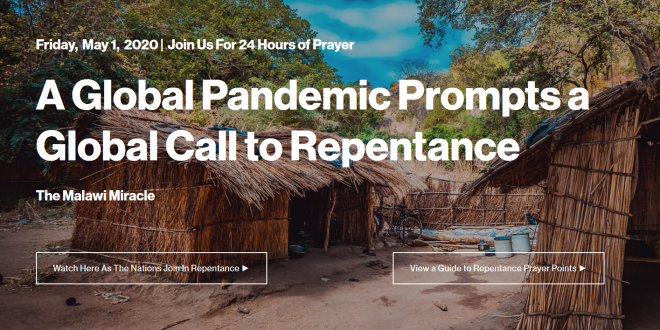 COVID To Be Stopped With 24 Hours Of Repentance For Sins Of Perversion, Idolatry, Lust, Mammon, Humanism

From organizers of the Global Day Of Repentance:

“So Aaron did as Moses said, and ran into the midst of the assembly. The plague had already started among the people, but Aaron offered the incense and made atonement for them.

“He stood between the living and the dead, [making repentance] and the plague stopped.  But 14,700 people died from the plague.

“Then Aaron returned to Moses at the entrance to the tent of meeting, for the plague had stopped.” – Numbers 16:47-50

Global solemn assembly, beginning in Jerusalem: Each of the 24 hours will represent a personal or a national sin.

Participants will seek the Wisdom of the Holy Spirit as to which hour or hours they may wish to spend that Day, confessing that sin and then, as they may decide, repenting of it.

Previous One Million Moms Vs “Gender-Bending” Jesus Film
Next Perkins: The US Must Stop Doing Business With China