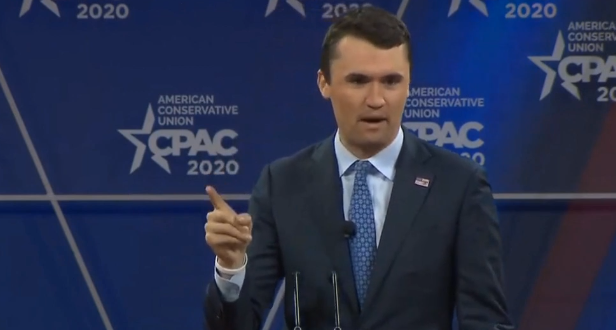 From an op-ed by Trump cultist Charlie Kirk:

In a country where religious freedom is literally part of our founding and codified in our Constitution, why do people seem more likely to insist that a local 7-11 remain open than that the corner Presbyterian Church has a Sunday service?

We do have some heroes out there who are making a stand. They deserve to be recognized. Last week in Thousand Oaks, California, Councilman Rob McCoy, also the Pastor at Godspeak Calvary Chapel, resigned from his elected position so that he could defy the State’s shutdown order and administer communion to his parish members on Palm Sunday.

While the church did conform to “social distancing” guidelines (I can’t wait for that PC term to disappear from our vocabulary) by allowing only 10 parish members in at a time, they refused to be denied the right to worship. Rob McCoy is a hero.

Last Saturday, pro-life Christian activist David Benham was arrested outside a North Carolina abortion mill for the sin of providing counseling to women contemplating ending their child’s life. An exercise of faith confronted by an exercise of a police state. David Benham is a hero.

My friend, Jerry Falwell, Jr. has reopened part of Liberty University, a private, Christian-based school. Despite being relentlessly attacked and threatened, he has stood firm against abandoning his, and his students’, Constitutional rights. Jerry Falwell, Jr. is a hero.

Surely, as Christians in 21st Century America we can stand against feckless, godless governors and demand a free and public expression of our faith.

The op-ed was published by the Falkirk Center, a new “think tank” whose name is a mashup of Jerry Falwell and Charlie Kirk. No link because fuck those guys.