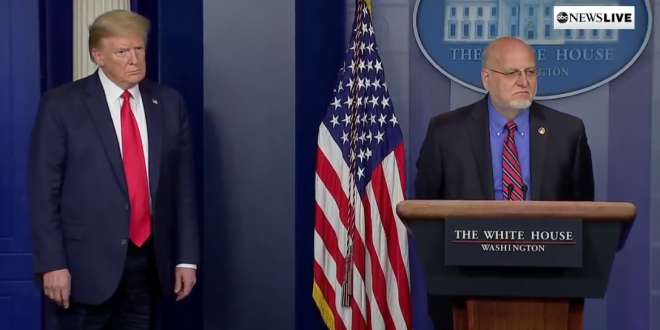 In a tweet Wednesday, Trump alleged Redfield had been misquoted — though he accused CNN of doing it rather than The Post. He also said Redfield would be putting out a statement on the matter. No statement was put out, but eight hours later Trump welcomed Redfield to clarify his comments at the daily White House coronavirus task briefing. Trump introduced Redfield by again claiming repeatedly that he had been “misquoted.”

But while Redfield emphasized — as he did in the Post interview — that he was talking about the flu and the coronavirus combined, he actually affirmed his quote, contradicting Trump. “I’m accurately quoted in The Washington Post,” Redfield said. All of that aside, what’s apparent from all this is that Trump is again bristling at a health official offering too dire a scenario. And that matters.

CDC Director was totally misquoted by Fake News @CNN on Covid 19. He will be putting out a statement.

Trump just marched CDC director Redfield out to claim he was misquoted by the WaPo. But in fact, Redfield just confirmed the entire story — below — said he was quoted 100 percent accurately.https://t.co/GNnDSxWUE3

And then Redfield vanished, never to be seen again

Trump tries to say that coronavirus could just disappear, but CDC Director Redfield warned in WaPo a second wave of COVID-19 in the winter could be worsened because it’s also flu season. Redfield confirms: “I’m accurately quoted in The Washington Post.”pic.twitter.com/JLz3WccgoE