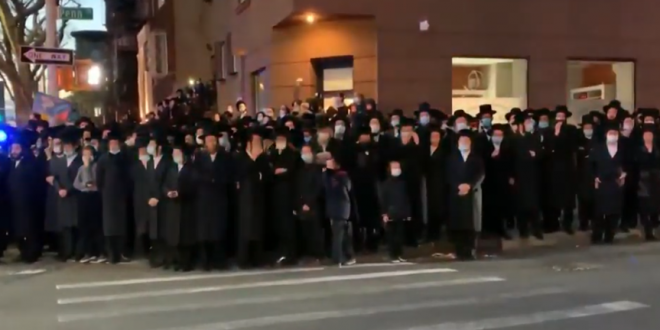 Mayor Bill de Blasio lashed out at Hasidic residents of the Williamsburg section in Brooklyn late Tuesday night after personally overseeing the dispersal of a crowd of hundreds of mourners who had gathered for the funeral of a rabbi who died of the coronavirus.

In a series of tweets, Mr. de Blasio denounced the gathering, which the police broke up, and warned “the Jewish community, and all communities” that any violation of the social-distancing guidelines in place to stop the spread of the virus could lead to a summons or an arrest.

The authorities have dispersed several well-attended religious gatherings since restrictions on such events were enacted in the face of the outbreak. The events that were broken up included weddings and funerals in New York neighborhoods with large Jewish populations.

Crowds of Hasidic men and women were packed tightly onto sidewalks and in the streets, some wearing masks but all other social distancing measures were completely disregarded, pictures posted on Twitter showed.

The funeral on Tuesday was held for Rabbi Chaim Mertz, who died at 73 from COVID-19 — one of the city’s over 12,500 deaths from the highly contagious virus that has forced nearly the entire country into quarantine.

The Orthodox Jewish Public Affairs Council said de Blasio failed to enforce social distancing when it came to the Thunderbirds and Blue Angels flyover earlier in the day, an event that brought people out of their homes and in common areas to watch.

Something absolutely unacceptable happened in Williamsburg tonite: a large funeral gathering in the middle of this pandemic. When I heard, I went there myself to ensure the crowd was dispersed. And what I saw WILL NOT be tolerated so long as we are fighting the Coronavirus

My message to the Jewish community, and all communities, is this simple: the time for warnings has passed. I have instructed the NYPD to proceed immediately to summons or even arrest those who gather in large groups. This is about stopping this disease and saving lives. Period.

We have lost so many these last two months + I understand the instinct to gather to mourn. But large gatherings will only lead to more deaths + more families in mourning. We will not allow this. I have instructed the NYPD to have one standard for this whole city: zero tolerance.

Tipster says this is the Williamsburg funeral today of Rabbi Chaim Mertz who died from COVID-19 pic.twitter.com/wsTvCrlzpb

This has to be a joke. Did the Mayor of NYC really just single out one specific ethnic community (a community that has been the target of increasing hate crimes in HIS city) as being noncompliant?? Has he been to a park lately? (What am I saying – of course he has!) https://t.co/LYKnUZm2Mc