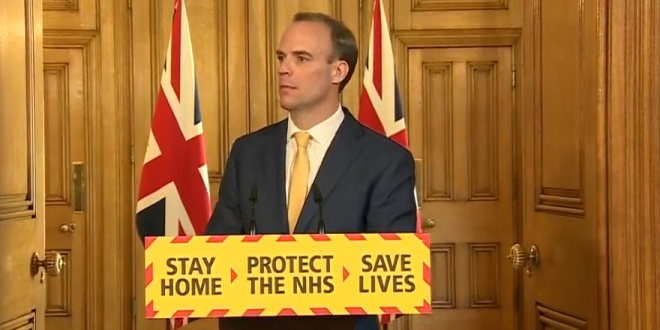 British Foreign Minister Is “Deputizing” For Ailing PM, Says Johnson Is Breathing On His Own, In Good Spirits

Foreign Secretary Dominic Raab has said he is “confident” Boris Johnson will recover from coronavirus, describing the prime minister as a “fighter”. Speaking at the daily coronavirus briefing, Mr Raab said Mr Johnson remained in “good spirits” and was breathing without assistance.

Mr Raab said Mr Johnson was receiving standard oxygen treatment and breathing without any assistance, such as mechanical ventilation or non-invasive respiratory support. The foreign secretary said he was standing in for the prime minister “whenever necessary”, including leading the daily meetings of the coronavirus “war cabinet”.

He said he had “total confidence” in the arrangements Mr Johnson had put in place to allow the foreign secretary to deputise for him. The cabinet has “very clear instructions” from the prime minister while he remains in hospital, Mr Raab added.

Technically, Dominic Raab is “deputizing” for Johnson, but unlike the U.S., the U.K. does not have a constitutional arrangement that sets out a deputy who would immediately take over power if the leader is injured or killed. That means that if Johnson dies from COVID-19, Raab won’t automatically become Prime Minister. Ultimately it’s the Queen who has the power to appoint a new Prime Minister, but by convention she follows the advice of the party of government.

In the absence of a Prime Minister, it would fall to the Cabinet to select a candidate to become Prime Minister on a temporary basis. Or, since the U.K. does not have a constitutional provision requiring a Prime Minister at all times, they could run the country collectively until a new leader was elected by the Conservative Party. The Queen would then appoint that person Prime Minister.