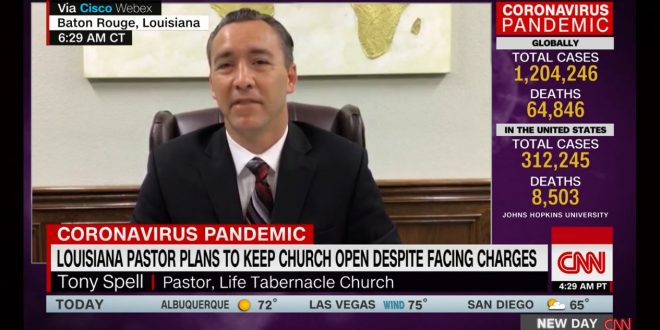 BRANCH COVIDIANS: Louisiana Pastor To Hold Three Services Today As “We Are Resisting The Antichrist”

“We’re defying the rules because the commandment of God is to spread the Gospel,” Louisiana pastor Tony Spell said in an interview with Reuters.

Spell, 42, who plans to hold three services at his 1,000-member Life Tabernacle megachurch in a Baton Rouge suburb on Palm Sunday, has defied state orders against assembling in large groups and has already been hit with six misdemeanors.

“The church is the last force resisting the Antichrist, let us assemble regardless of what anyone says,” he said. For Spell and others, the public health orders are a threat to religious freedoms and constitutional rights.

This morning Spell appeared on CNN where host Victor Blackwell demanded to know how he can consider himself pro-life and yet endanger the lives of his congregation.