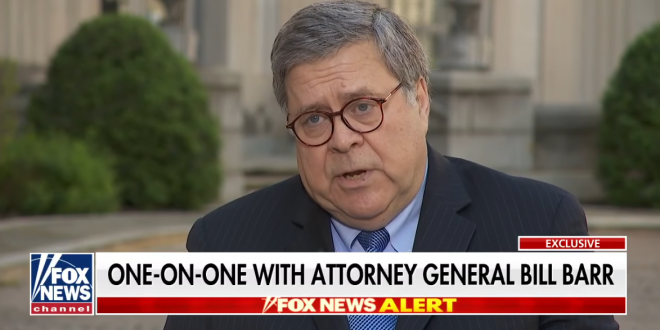 Bill Barr: Media Is On “Jihad” To Discredit Malaria Drug

In an interview on Fox News, Attorney General Bill Barr told the anchor Laura Ingraham it was “disappointing” to see the media response to Trump who had been “statesmanlike” in working with governors and yet still had to deal with “snarky ‘gotcha’ questions from the White House media pool.”

He said that “the stridency of the partisan attacks on him has gotten higher and higher,” and said the “politicization of decisions like the hydroxychloroquine has been amazing to me.”

“As soon as he said something positive about it, the media has been on a jihad to discredit the drug, It’s quite strange,” Barr said.

AG Bill Barr, on Fox News, refers to current restrictions as "draconian measures" and says at end of April, he thinks we should "allow people to adapt more than we have, & not just tell people to go home and hide under their bed."

Barr, a major proponent of executive power, adds "I am concerned that we not get into the business of declaring everything an emergency & then using these kinds of sweeping, extraordinary steps. But given where we were back in March, I think the president made the right decision"

Previewing segment Fox plans to air tomorrow, Barr says what happened to Trump in Russia investigation was “one of the greatest travesties in American history." Probe, he says, was started "without any basis" & steps taken post-election were meant "to sabotage the presidency"