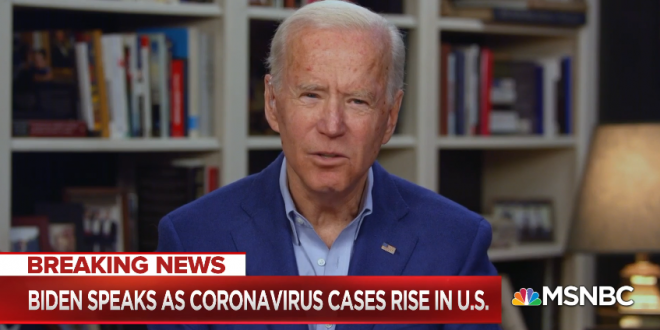 Joe Biden said Tuesday night that he’s not sure the Democratic National Convention will go on as planned in July because of the coronavirus outbreak.

On MSNBC’s “11th Hour,” host Brian Williams asked the leading Democratic presidential contender whether he envisions prominent party members from all 50 states packing into a hot arena in 104 days.

“It’s hard to envision that,” Biden responded. The former vice president suggested that holding the convention should be contingent on what experts recommend, saying, “We should listen to the scientists.”

“I think both parties are very likely, I hope, to agree on postponing the convention or doing something that won’t bring thousands of people together to kill each other ultimately with COVID-19,” Democratic Rep. Emanuel Cleaver of Missouri told Fox News. “I mean the Olympics taking place in July is already canceled and postponed until next year.”

“I think the DNC and the RNC both have to evaluate all of their options,” Democratic Rep. Debbie Dingell of Michigan told Fox News. “We need to pray that we get through this quickly, but we also need to very carefully consider any large gatherings for the next year.”

Early last month DNC chairman Tom Perez said the convention would go forward as planned, but we were living on a different planet back then.

But Joe Biden says the show must go on for the 2020 election in November. https://t.co/xkTUV0iDh4